Albany Common Council Takes Initial Step Toward Rent Control
On Monday, December 16th, the Albany Common Council passed a resolution calling on Mayor Kathy Sheehan to conduct a vacancy study in the City of Albany to determine whether the city would qualify for rent control under the Emergency Tenant Protection Act. For Albany to qualify its vacancy rate would have to be 5% or below. Other municipalities across New York State have begun this process. The City of Kingston has conducted a vacancy study that cost $32,000 of taxpayer money, and the City of Rochester is in the process of conducting a study as well. NYSAR and GCAR are actively engaged with the Mayor’s Office and the Common Council and we will keep you updated as the process moves along.

Priorities for the 2020 Legislative Session
NYSAR will again be actively lobbying lawmakers in the state legislature in what promises to be a very busy legislative session. With the state facing a projected $6.1 billion budget deficit, difficult choices will have to be made this year.

Issues that NYSAR will be engaged on at the State level this year include:

There will be additional issues that NYSAR will get engaged in as the legislative session moves throughout the year.

State Senator George Amedore to Retire
State Senator and local REALTOR® George Amedore has announced that he will not seek re-election in 2020. Senator Amedore was elected to the Senate in 2015 and prior to that he served in the State Assembly for seven years. So far there are two Democrats who have announced their respective candidacies for the 46th Senate District, Michelle Hinchey and Gary Greenberg. As of December, no Republican has announced. 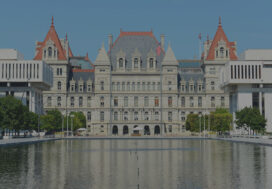